The second episode of Moon Knight fully introduced May Calamawy's Layla, sprinkled in some important intel, raised the stakes somewhat, and gave us a fresh-pressed look at this story's take on "Mr. Knight," the three-pieced suit variant of the "Fist of Khonshu." Oscar Isaac continued to dazzle as a brought-to-the-brink Steven, who found himself more at war with his Marc personality than ever, while Ethan Hawke delivered more of his softly sinister Arthur Harrow (including a better idea of his plan). The show is still gifting us with pronounced scenes between the two, but it was also here in the second episode that the Steven bewilderment element started to wear thin.

Steven Grant's confusion, living a half-life while also unknowingly serving as a vessel for an Egyptian God, helped last week's premiere episode crackle with slapstick mystery. Now, as the puzzle pieces begin to fall into place more, his utter delirium’s feeling like an anchor holding this show back. Granted, we still aren't being given the entire mosaic, since Marc never feels like clearly explaining everything to Steven, but questions are building up at an alarming rate and Episode 2 only let a little air out of the balloon, answer-wise. Even at only six episodes a show can dawdle when it should dash.

Okay, here's what we know-know. Marc Spector serves as an avatar for Khonshu, a deity that saved Marc's life out in the Egyptian desert. Marc doesn't like this role (at least he doesn't recently). Khonshu's a massive jerk (Harrow, Khonshu's former mark, even says as much) and now has eyes to turn Layla into his next vengeance-dealing servant. So the two heroic goals here are: to stop Harrow from unleashing Ammit and her lethal pre-crime wrath on the world and to protect Layla from Khonshu.

Ultimately, Ammit and Harrow aside, is the true adversary here... Moon Knight? Khonshu's avatar itself? If so (and let's say the Harrow stuff sort of gets sorted out in the next episode or two, leaving us with a different endgame), then this might be the first problematic superpower in the MCU since The Hulk -- meaning, the superhero who causes its alter-ego nothing but grief and turmoil. It may be good in a fight, but a living hell to endure otherwise. Anyone who gets powers develops a more complicated life, obviously, but Moon Knight seems to be doing no one any good. Heck, the main villain so far is the former Moon Knight.

And yes, you do have to wonder about who these Gods are. Are they actually Gods or aliens? This, among other things, makes Moon Knight: The Series feel even more disconnected from the MCU. It's easy enough to not mention any Avengers or The Blip but to also fly in the face of everything Thor taught us with Asgard -- or even what Eternals just told us about myths and gods in various ancient cultures -- seems like a lot. How are Ammit and Khonshu possible? Granted, this was never quite an issue in the comics, so maybe that's the mental route to take here.

The Man in the Moon

By the end of Episode 2, Marc the Merc's in control, but he also tells Steven that once he's done with this mission he's more than happy to vanish. Can Marc do that? We assume he's the dominant personality, right? One would have to be in order to actually become a mercenary and get married and do fully rounded life things. Of course, Marc could just be lying in order to get the job done, but that doesn't change the fact that we still don't know much about the Steven/Marc situation except that Steven was part of the package, so much so that Marc had previously assured Khonsu that Steven wouldn't get in the way.

Some things to wonder about, if you so choose: 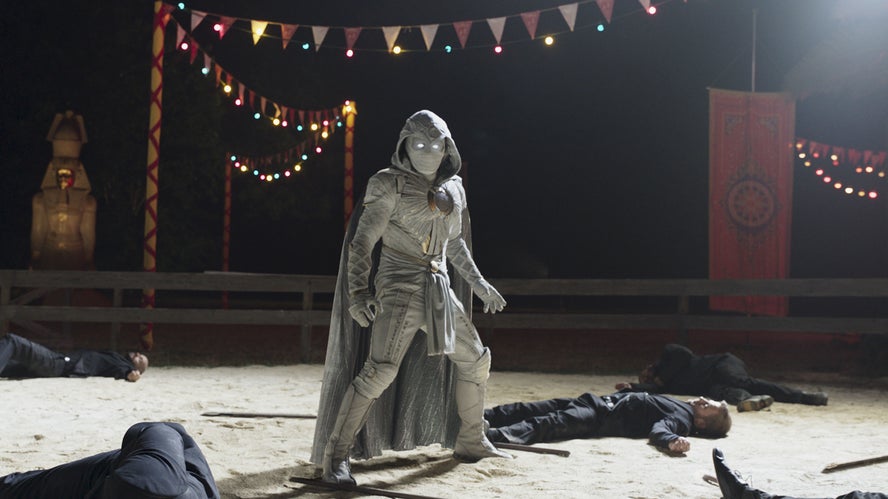 Last week, we more or less knew what Harrow was up to. This week, Steven heard the sales pitch personally, only to immediate realize that it's nuts, removes free will, and will kill children in their cradles. Ammit's reign would sort of smush Loki's desire to rule Earth (peace through compliance) with Winter Soldier's Project Insight (eliminating perceived threats) with a handful of other ethically wonky versions of utopia. Does this mean we're not destined for a commune life of lentil soup and proficiency in multiple languages? Afraid so.

Steven's questioning of Harrow's idea chain was one of his best character moments so far. He's been perpetually afraid and aimless since we first met him, so to hear him actually vocalize the worst parts of this blissful crime-free dream felt important, and an indication that Steven has a hero's spirit buried down deep (that's not just Marc nagging him). The guy's a nesting doll of chaos, with both Marc and Khonshu's voices pecking at him, but he's decent enough to know right from wrong, and to want to protect Layla without really knowing her.

Layla as a character doesn't feel settled in on the series just yet since she entered the mix as yet another character designed to confound Steven. She also was immediately flummoxed, thinking that Steven was just a cover that Marc was using (does she not know about her husband's DID?) so it certainly feels like she'll resonate better when all the cards are on the table and she gets to interact with the world she knows and not a gentle nitwit. Things came to a thrilling head at the end, though, when Steven, not Marc, called upon the Moon Knight suit and did battle with Ammit's monster.

This version of Moon Knight, dubbed Mr. Knight, was created by Warren Ellis and artist Declan Shalvey as Moon Knight's public-facing persona. Basically, he repped himself in a less threatening form when doing police consultation. Here, Mr. Knight is brought about by Steven's misunderstanding of the word "suit" and the entire fight scene worked as a nice follow up to Steven's action shenanigans in the premiere because he had more agency and it blended all the mayhem in his head into one blow out.

Marc taking over fully, and becoming O.G. Moon Knight also felt rewarding, giving us a much better showing of Moon Knight than the off-screen antics of the first episode. In the end, we're dropped off on the doorstep of what looks to be a very different adventure, with Marc in solemn control, Steven relegated to mirrors, and Egypt as the backdrop. Episode 2 was good, but it definitely pushed Steven's perplexity about as far as it could go.

Moon Knight's second outing had action, intrigue, and more great stuff between Oscar Isaac and Ethan Hawke. It brought the conflict between Marc and Steven to a head (for now) though it also got bogged down slightly by the continued use of Steven's ignorance and befuddlement as an initial obstacle. It felt like the second half of a two-parter, setting us up for a different dynamic going forward on a path that hopefully provides more context and backstory.

India Could See Increase in Manufacturing of iPhones, Other Premium Phones After Tax Cuts on Imported Parts