Delhi's air quality remained in the 'severe' category for the third day on the trot.

In light of the deteriorating air quality in New Delhi, a central government body has restricted the operation of several diesel cars in the national capital. All non-BS VI diesel-run light motor vehicles have been banned as part of the anti-pollution measures.

Violation of the ban, recommended by the Commission for Air Quality Management (CAQM), will attract a penalty of Rs 20,000.

The order issued by Delhi Transport Department states that only BS6 complaint vehicles and essential and emergency services will be allowed to ply on the road till the situation improves.

Delhi transport department has also sent a message to vehicle owners whose cars come in the 'banned' category.

"Since your vehicle is falling in above category you are hereby directed not to ply your registered vehicle in Delhi till enforcement of Stage III/ IV of GRAP. If found plying, the vehicle will be liable for prosecution under section 194 MV Act, 1988 which entails with a fine of Rs. 20,000," the message read. 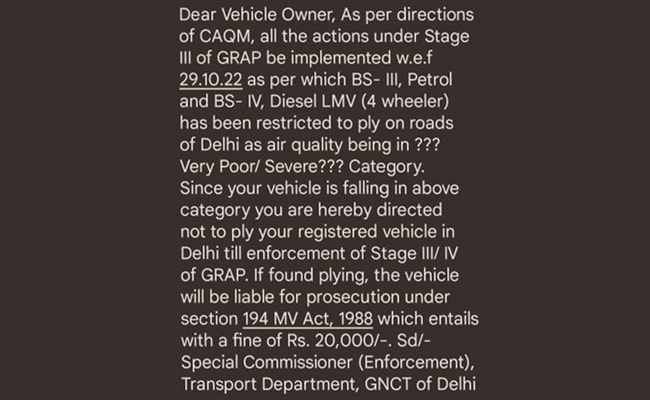 Despite the ban, such vehicles are still seen on Delhi roads, with heavy traffic still around the city.

Delhi's air quality remained in the 'severe' category for the third day on the trot. A thick layer of smog continued to cover Delhi as the national capital recorded an AQI of 408 today. An AQI of above 400 is considered "severe" which can affect healthy people and seriously impact those with existing illnesses.

Diesel-operated medium and heavy goods vehicles registered in Delhi will not be allowed to ply in Delhi except those carrying essential commodities or providing essential services. However, all CNG and electric trucks would be allowed to enter Delhi.

Featured Video Of The Day

The Six Superheroes to Invite for the Perfect Thanksgiving Dinner