Jeremy Renner Avenger actor Jeremy Renner is slowly recovering from the terrible accident he suffered when a snowplow crushed him. The actor who played Hawkeye was rushed to the hospital, where the medical staff saved his life. After several days of observation, he could return home to be with his family and continue his rehabilitation.

The actor published a photo of himself doing part of his rehabilitation routine on Saturday. In it he revealed the magnitude of the consequences of the accident on his body and also took the opportunity to thank his family and friends.

The Avenger actor Jeremy Renner posted on his Instagram account a photo where he was doing part of his therapies to rehabilitate his legs. He commented in the photo that he had broken 30 bones in his entire body when the snowplow ran over him.

He commented on the photo: “Morning workouts, resolutions all changed this particular new years … Spawned from tragedy for my entire family, and quickly focused into uniting actionable love”. He later thanked all the support with this comment “I want to thank EVERYONE for their messages and thoughtfulness for my family and I”.

Renner went on to thank the support with another comment “Much love and appreciation to you all. These 30 plus broken bones will mend , grow stronger, just like the love and bond with family and friends deepens . Love and blessings to you all”.

Many Jeremy Renner friends commented on his post, including his Avengers co-stars. For example, Chris Hemsworth, the actor who plays Thor in The Avengers, wrote “Your a champion mate! We love you.” This was not the only one because Chris Evans commented on the networks giving his contribution, as well as the Russo brothers.

Details of the Accident the Hawkeye Star Suffered 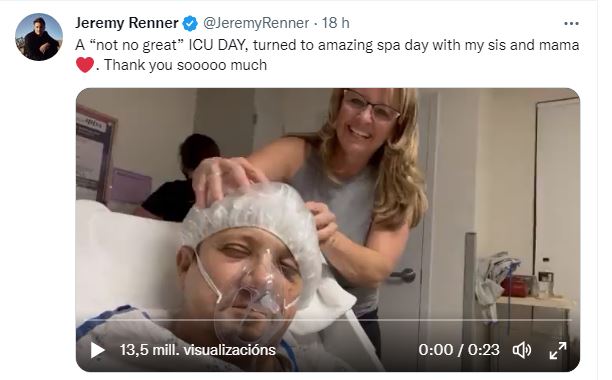 The accident occurred on January 1, when Jeremy Renner, Avenger actor, cleared snow with a snowcat. The device ran over him at one point, fracturing all 30 bones. Paramedics attended to the actor, and a plane flew him to a clinic. He remained in intensive care for several days until he was out of danger.

The star had to undergo surgery at the clinic to repair orthopedic injuries and a closed thoracic trauma. He came out of this operation relatively well, as he must wait for his bones to regenerate completely.

Jeremy Renner Avenger actor, commented that he will have to do rehabilitation and that he will also take advantage of the time to spend with his family. He also said he would enjoy watching the second season of Mayor of Kingstown, a series he stars in.

As for the events, they were declared on January 3 as an accident. This was done by the city sheriff, who opened an investigation due to the strangeness of the events. However, after taking statements from all the neighbors and the actor’s family, there was no doubt about what happened.

Android 14 May Allow Some Phones to Be Used As Webcams: Report